By Abhimanyu Kumar May 11, 2011
Its been about 2 weeks since i posted anything.So here are a few updates.The quadrocopter design is finally complete(well sort of) and so is the flight computer. The sensors (Wii Motion+  and Nunchuck) are here. They seem to be working. The ATMEGA328 (Arduino based) which is the main component of the flight computer also arrived about a week ago and worked flawlessly.

This is all pretty cool but the main news is that I've finally ditched the name CPUV because i realized it sucked and now im going to name (Warning : Star Wars reference coming up) it "The Force". The flight computer is called Luke as it shall bring balance to the Force. Any more Star Wars references are welcome.
Ok now that my moment of insanity is over , here are the designs: 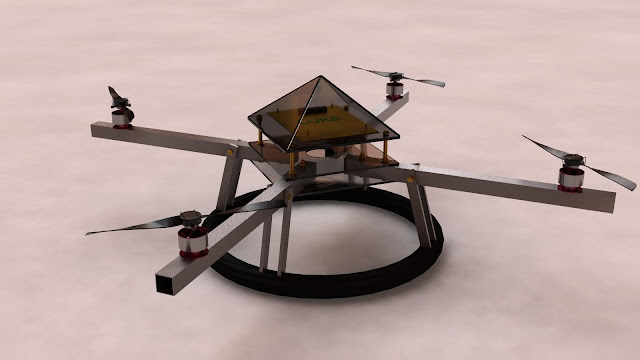 Right now I'm building the pyramid (reminds me of my very first blog post) on top of the quadrocopter.I might try to change the ring i used for the base to something smaller when i actually start building the landing gear but this render took an hour and i was not really in the mood to edit it and render it out again.
The assembly instructions for everything except the landing gear are here in this animation which i made with some horrible light and shadow settings (Who cares as long as the basic idea gets through).


Note: The animation shows the motors being mounted straight. This is fine if you have 2 clockwise propellers and 2 counter-clockwise propellers. In-case all 4 of your propellers are of the same type (as is the case with me) then you need to tilt 2 of the motors slightly at an angle (between 5 to 10 degrees).
The circuit for the quadcopter is actually the same one being used in the www.multiwii.com. I'm using the one in the X configuration (link and link). The front of the quadcopter will be the part between the arms having the white and blue LED's. Here is a pic of my circuit. Arrow marks the front of the quadcopter. 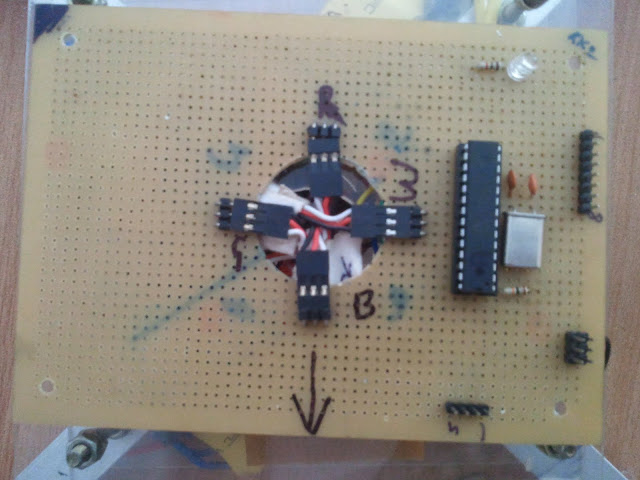 Right now my quadrocopter is almost ready to fly. All i need to do is connect the RF receiver (for which the order was placed about 12 days ago but i still have not got it. I expect a further delay of 4-5 days). Once i get  that component we are gonna fly. If you are looking for some material on the various RF modules available go here.
Links to part 1 ,part 2 ,part 3, part 4 & part 5
ATMEGA328 Conceptual Render Design Quadrocopter Rendering Wii