By Abhimanyu Kumar July 12, 2011
The quadrocopter project was going fine till i decided to start soldering the circuit for the flight controller. I've burnt my hand countless times while soldering - frankly speaking im lousy at it - but this was worse.

I was powering the circuit from the BEC (Battery Elimination Circuit) on one of my ESCs. As it happens due to the genius of my soldering technique i accidentally shorted the GND and the VCC of the BEC together and as soon as i connected the battery there was a crack sound and the inevitable distruction of the ESC. Thankfully we did have a spare ESC at home that was being used in a hovercraft project that my flatmate was working on so that got sorted. 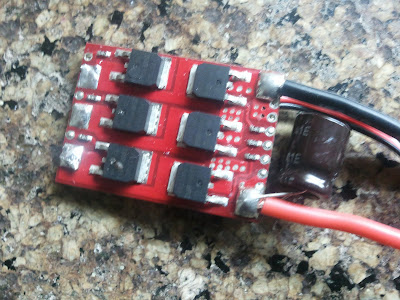 After that things got worse. The maiden test flight - not conducted by me - of the quadrocopter (done just by connecting the ESC's to the RF receiver with no gyros and no control circuitry) did not go well - as expected - and the entire thing just flipped over after going about 8-10 feet in the air and came down in a less than controlled fashion (Damn gravity). The damage was minimalist - the lower acrylic sheet got a crack on it and 2 of the propellers had light scratches on them. After this i decided to replace the acrylic sheets with something less brittle  some time later decided to make the entire structure - this time with a few changes.

Then that someone accidentally sat on the flight controller board for the quadrocopter (also called Luke) and broke it into 2 pieces. Thankfully i had spares for all the components for the board so i will be re-soldering it and this time i will be careful.

I will write a post as soon as im done with the new structure and the new board but that could be some time.
Failure ESC Quadrocopter Soldering Test

By Abhimanyu Kumar August 22, 2010
Character animation done in 3Ds max. Model of a soldier downloaded form the web. Rigged using biped and Physique Modifier.Applied some .bip (motion capture) files to it. Then and rendered it out in using mental ray with daylight system for shadows and lighting.
Read more